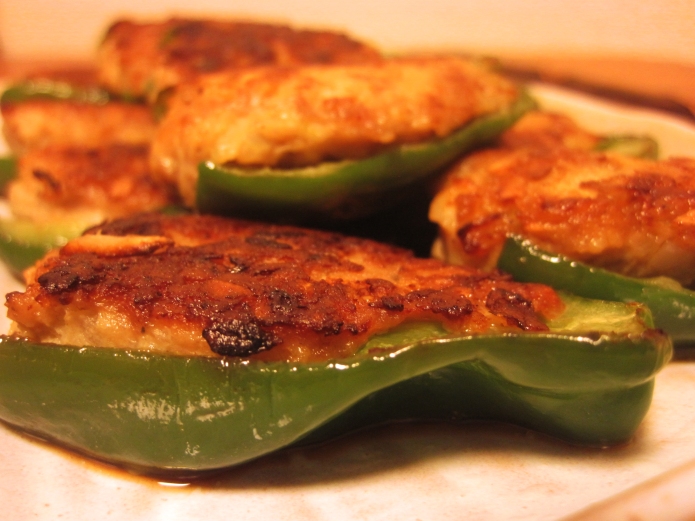 when my japanese elementary schoolers list off the foods they detest, there are three which top the list without fail.  eggplant and mushrooms are neck and neck at number two, but so far, the undisputed winner is piiman.  the following is a brief list of reactions i have observed at the mere mention of the word piiman:

piiman ピーマン(borrowed from the french word poivront, which means “bell pepper”), look like green bell peppers which have hit with a shrink ray.  based on appearances, they differ from larger capsicum annum (e.g. the green sweet bell peppers we can get our hands on in the states) based on size alone.  their internal anatomy, color, and waxy sheen is exactly the same.

but as the old adage goes, you shouldn’t judge a capsicum by its color.  although they are pretty cheap and can be found all year round, piiman can be tricky to cook with.  their texture and flavor is fundamentally different than the big, fat, juicy green bell peppers available all across the united states.  they have an earthier taste and extremely thin flesh, which makes them particularly prone to overcooking.  the soft, mushy, pale strips of veggies that result are the bane of nearly every grade school across the great nation of japan.  their thinness and relatively strong flavor necessitate different cooking techniques; instead of baking, they are almost always stir fried or grilled for short periods of time over very high heat.

i don’t loathe piiman, but i never really raved about them either.  when they show up in school lunch, they invariably take the form of chinese pepper steak, which the japanese refer to as chinjao rosu 青椒肉絲.  there is certainly nothing wrong with thinly sliced pork, bamboo shoots, and sliced piiman sautéed in a little bit of sweet soy sauce.  but it doesn’t exactly knock your cuilnary socks off in the flavor/texture department.

last year, i finally took a liking to piiman due to the concerted efforts of an 85-year-old grandma, her 90-year-old deaf husband, and ken-chan, their rotund son in his mid-50s.  the three of them owned and worked in a restaurant a few blocks from a community center where the junior baseball team i tutor used to practice.  twice a week, i would leave school, eat dinner at their restaurant, have a chat with the old couple over a cup of tea or two, and then head to the community center to train train with my kids.

never once did i order anything.  every time i came in, ken-chan would ask me whether i felt like meat of fish that day, and based on my response he would make me a set meal (which the japanese call teishoku).  my obligatory bowl of rice and cup of hot green tea was always accompanied by a five or six bites of a few dishes, all different in flavor and texture.

every once in a while, they would whip up a batch of piiman stuffed with a mixture of ground meat and veggies.  they weren’t anything complex, but their simplicity was what made them so darn magical.  their stuffed piiman had just the right amount of umami, salty, spicy, and sweet.  it was love at first bite.  eventually, i even convinced her to teach me how to make them at home.  her one condition was that i use the recipe only for good, never for evil.

of course i readily agreed.

15 thoughts on “poor man prepped a plate of pan-fried piiman.”