it just isn’t that good.  i mean, i like it, but if i had to take my pick between a big fat juicy prime cut of steak or anything made of ground beef, i’ll let you guess which one i would end up with.

don’t get me wrong.  i didn’t write this post to rip into ground meat with vengeance.  i wrote this post because i totally understand people, like my girlfriend, who think it is gross and super shady.  she dislikes ground meat for, as far as i can figure, two main reasons.  first, nearly every food made out of ground meat has an unromantic, disgusting sounding name (e.g. meatloaf).  second, by looking at it with the naked eye, you have approximately a 0% chance of determining what animal it is comprised of.

this post about my girlfriend’s metamorphosis from a ground meat hating caterpillar into a butterfly who enjoys well-prepared burgers, keema, and meatballs.

every time we went to the grocery store together and i picked up a package of ground meat, she would almost always retaliate with a “can’t we just get some chicken or fish?” or even the occasional “how about sashimi instead?”  and i have to say, i almost always gave in.  sashimi is so cheap and so tasty here, and just about any cut of chicken is superior in texture and flavor to ground meat.

but it started to weigh on me.  i started to ask myself profound questions at night.  what if i could never make a meat sauce again?  what if i had to live the rest of my days without beef stroganoff?  how could i look myself in the mirror without regularly making a triple hamburger with all the fixings?  and why would i want to grow old if i could never again eat ravioli?

finally, weary of my sleepless nights, i decided to play the culinary gumshoe and dig a little deeper into her disdain for ground meats.  there had to be a solution.  luckily, the information i discovered cracked the case wide open.

and just like that, all those weeks of trouble and regret and apprehension melted away.  she had developed a specific disdain for ground beef because of its weird plasticy texture and strange greasiness.  but that disdain had somehow evolved into an umbrella of apprehension towards ground meat on the whole.

and so i set to work making all sorts of amazingly delicious foods chock-full of ground pork and ground chicken.  kabocha cream keema.  deep fried japanese spring rolls.  shiitake pesto burgers.  and when i got my hands on a new toaster oven, i made her some good old fashioned baked pork meatballs. 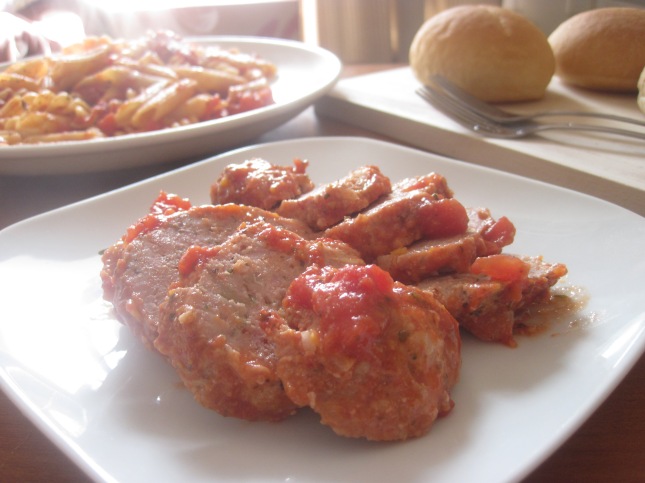 note:  as good as these are hot, they can be quite delicious when served cold.  i know, i know.  cold meatballs?  you are crazy, poor man.  when we end up with some extras, we like to slice the cold meatballs and eat them with bread, sort of like a head cheese sausage.  they can also be paired with slices of cheese, fresh veggies, and softboiled eggs to make an awesome breakfast platter.

6 thoughts on “if you can’t stand the meat, get out of the kitchen.”