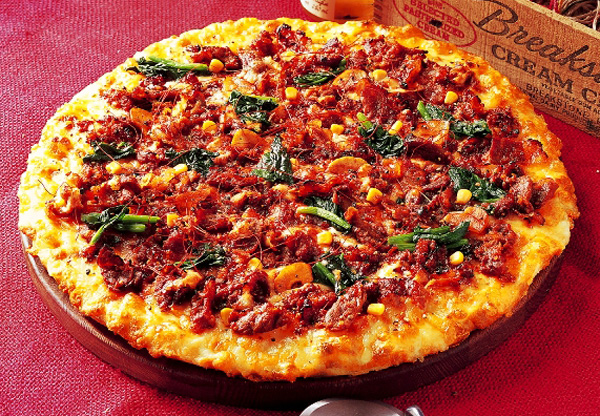 sure, a lot of the stuff you can get from delivery chains in the usa is absolutely terrible quality.  not to mention frozen pizzas, which are (on the whole) nasty and super shady.  it has become a lazy man’s food in the states because it is cheap, delivered directly to your house or place of work, and requires no utensils to consume.  even elementary schools use it as the default school lunch because no kid can refuse greasy bread and melted cheese garnished with meat and (god willing) a few slices of vegetables.

but pizza can’t be held responsible for the evils americans use it for.  well executed pizza is magical, like true love or unicorns.  logic dictates that any food which contains all the major food groups in a single serving must be essentially good.  think about sandwiches.  i think i’ve proved my point.

suffice to say, there is a silver lining to every cloud.  for every barbarian who orders a meat-za with extra meat or a chicago deep dish pizza, there is a kind, loving soul who created a truly excellent pizza from scratch in their own kitchen.  those people keep traditional pizza alive.  after all, the original pizza wasn’t decadent or greasy or caked with hamburger.  it was pioneered by poor nightshade farmers around naples in the 18th century as a means of adding tomato to their leavened flat breads.

you may be thinking, “ok poor man, your long-winded story has absolved pizza of all its wrong-doing.  but what the heck does any of this have to do with japan?”

by which i mean to say, japan has a food they call pizza.  it has all the major ingredients (i.e. tomato sauce, cheese, and bread).  but japanese pizza also has all kinds of auxiliary ingredients, like potatoes.  and corn.  and mayonnaise.

why yes, that is a pizza with potatoes, mayonnaise, and shellfish.

here’s an analogy that might make the comparison a little clearer.  think of pizzas as salary men.  and then think of the people making the pizzas as scientists.  apparently, japanese scientists decided at some point that all the salary men in japan would be better workers if they had bonus limbs which were procured from a variety of wild animals.  so now, instead of having a bunch of average, run of the mill, hard-working salary men, japan’s white collar workers all have shark fins or dog ears or tentacles hastily sewn onto their bodies.

japanese delivery pizza is soggy, greasy, small, overpriced, and strange tasting.  when i ask japanese people what their favorite pizza is, most respond with either margherita or cheese.  and i don’t blame them.  those are the two pizzas i can think of that, no matter what happens, are at least edible.

every now and again, a pizza oasis springs up in a city here or there.  i’ve been to a few restaurants which have genuine, well crafted pizza.  but the price of high quality ingredients and upkeep combined with an overall cultural lack of appreciation for traditional pizza makes the lifespan of such establishments pretty short.  so what is a pizza loving poor man to do?

well, that’s simple.  fire up the toaster oven, of course.

14 thoughts on “japan and pizza: you can’t miss what you never had.”