i love japanese food.  and when i say i love japanese food, i don’t mean just traditional japanese washoku.  i love western cuisine-inspired yōshoku, too.  japan has all kinds of awesome variations on classic american and european dishes, such as the curry filled donut (カレーパン), breaded pork cutlets (豚カツ), and spicy cod roe spaghetti (辛子明太子パスタ).  some japanese chefs are protectors of art forms passed down for generations, while others are innovators using a relatively new palette of flavors and ingredients to make tasty new dishes never before heard of.

omuraisu is not, in my opinion, one of those dishes.  it’s an omelette with rice inside.  it was first pioneered in japan in 1900 in a restaurant in ginza called renga-tei.  granted, it is popular among kids and super easy to make, but it still has an odious lackluster feel to it every time i see it in a restaurant.  yeah, it might be swimming in a pool of demi-glace sauce or garnished with parsley or something, but it doesn’t change that fact that, at its core, omuraisu is just missing something.

when i did some thinking the other night, i realized why i don’t like omuraisu very much.  as luck (or unluck) would have it, the fried rice portion of the rice omelette is seasoned with straight-up ketchup.  and i don’t like ketchup.  i dislike ketchup enough that i have regularly called it out as the worst thing to ever happened to sauce in the history of cuisine.

but i’m not a stubborn man.  i’ve resigned myself to hating ketchup, but don’t want to not like omuraisu.  so i pulled up my bootstraps, strapped on my cooking pants, and decided that i was going to make a brand spanking new omuraisu recipe that didn’t use a lick of ketchup, was chock-full of flavor, and implemented a plethora of ingredients that would turn the head of even the most stubborn omuraisu hater.

and here’s what came out of my noggin. 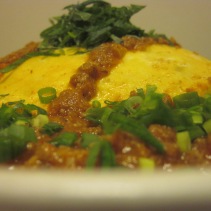 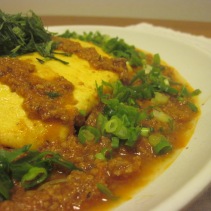 8 thoughts on “omuraisu: abused by ketchup for 113 years.”