enough gastronomy.  reading about avocados this week got me fired up, and today i couldn’t stop myself.  i got home from work and decided to engage the avocado with every ounce of cooking chutzpah i could muster.

avocados aren’t just for guacamole.  yeah, guacamole is great.  but that crazy green fatty fruit is so so so much more than something to mix cilantro and lime juice with.  think outside the box, and give one of these recipes a try.  our scaly pear-shaped friend will thank you for it, i’m sure. 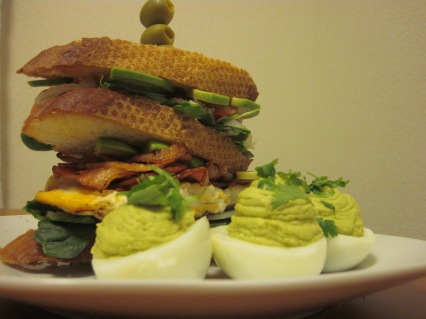 olives watching from on high.

scoop with bread, chips, chicken. all up to you.

garnished with cilandro and shredded chicken. 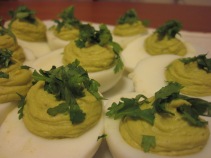 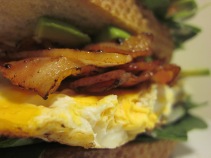 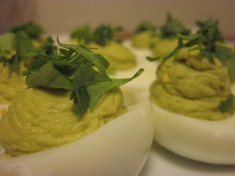 green, through and through. 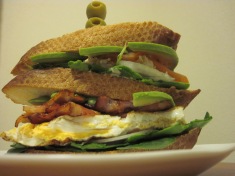 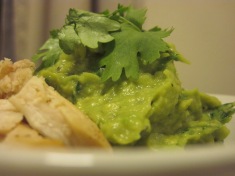 don’t be mad because you didn’t think of it.  eggs are amazing.  avocados are amazing.  bacon is amazing.  so naturally, if you made a breakfast food that combines all three, it would have to be amazing by association.

easy to make and so obvious that if it were a snake it would have bit you, starting any day off with two avocadeggs will make you feel superhuman.  get ready. 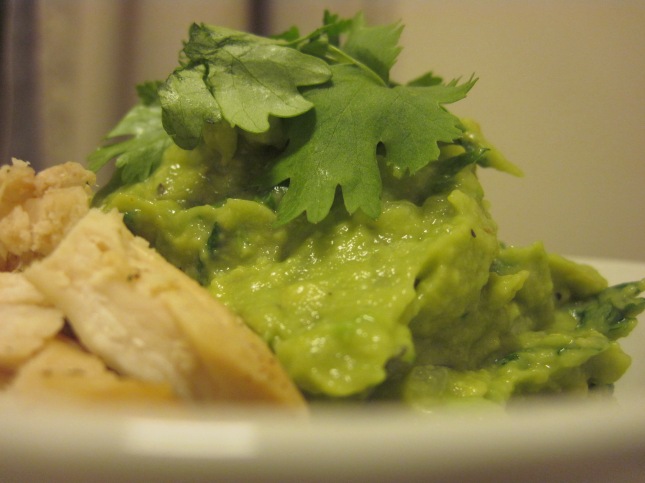 i hope most people know how to make guacamole, but just in case i figured i would relay my own recipe.  just as a warning, this guac isn’t exactly the smooth and creamy kind.  this guac is the hearty paste made for applying to sandwiches, chips, burritos, and salads.  prepare yourself.

that stomach starts to grumble.

and that is why sandwiches are excellent.  “sandwich” could be the most vague word ever used by a chef, in that it basically just means stuff between pieces of bread.  but why not embrace the vagueness?  why do people who profess to be sandwich connaisseurs limit themselves to humdrum sandwich contents like ketchup, yellow mustard, and bologna?  why not get unconventional with it?

this sandwich was born out of the desire to have a “snack” during an all night walk.  a friend and i had decided to walk to a neighboring city after work, have a beer, and walk back.  about 20 kilometers didn’t really worry either of us, but i promised that i would bring some food for the all night walk if he brought some booze.  he brought the booze, and i brought a few snacks.

let’s not fool ourselves.  deviled eggs are great, and second-to-none among comfort foods.  i’m pretty sure that everybody’s mom at some point in time made deviled eggs and let you lick the spoon.  and even if your mom didn’t, you probably lie about it and say that she did.  yeah, they are that good.

the sad truth is that deviled eggs, like most deviled foods, will kill you young.  if cholesterol wanted to be elected for government office, it would erect a giant billboard with a picture of deviled eggs, because it knows that people just can’t resist.

but, contrary to common belief (especially in the united states, russia, and japan), there are things in this world that can be used as a creamy thickener that are not mayonnaise.